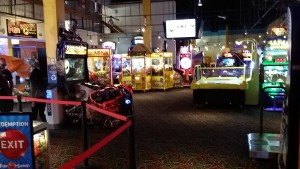 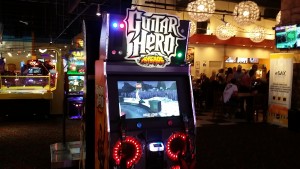 So I made it to my first eSAX event! The program was hosted at Funhaven, and to be honest I wasn’t sure what to expect with the potential mix of business dress with kids casual, but things were professionally handled and looked great. We took over their upper room party area, which was nicely set up for the venue. Things did get a little warn half way through the night, I guess Funhaven didn’t have a chance to turn their AC on, but we managed to make it through the night with ice cold drinks. 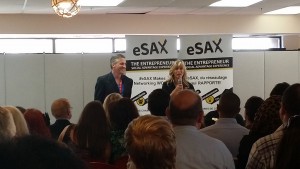 Dylan Black (from boom 99.7) was our host for most of the night, though Jarrod Goldsmith did have to start things off as Dylan was rushing from a previous work engagement.  This time around, was slightly different from eSAX’s usual format and  I was told that normally a guest speaker is brought in, but this time we had a panel of entrepreneurs (the sponsors from the show) to which we could ask questions of. Most of the questions were good or funny, especially all the ones about singing or singing requests. Though there were a couple of odd questions that almost seemed out of place for the venue… 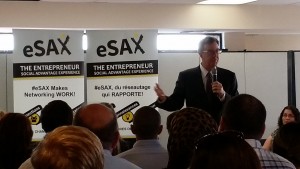 Things took off with an update from our beloved Mayor Jim Watson on the plans for the new light rail system (all good, things are on budget and on time at the moment!) and he thanked Jarrod for hosting eSAX and getting the entrepreneurial community going. 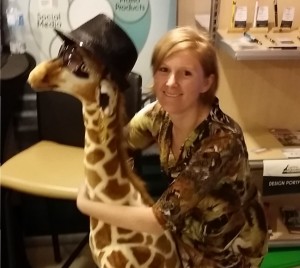 I also had a chance to catch up with Brittany Richardson-Reed of Creative Equilibria Promotions and found out that despite their new building be structurally unsound and them having to move again things are going a growing well for her business. I’ve also been talking to her about some promotional material for Wildcat Engineering Solutions so expect to see some of that stuff soon! She brought in this pair of cute stuffed giraffes (as a representation of her logo) and I had to ask her for a photo shoot with the little guy wearing Jarrod’s fedora!